There are times in my life where my fellow Colorful Monsters correspondents tell me I should listen to an album, leading me to listening to the first song from it and then doing something else. Whether or not the artist is any good is beyond my comprehension as I am a very picky listener. If this blog was Look At This And Why I Hate It, I would talk to you about songs from those occurrences. Instead, we have a rare example where an album is so gosh darn catchy that I wake up to the music in my head.
END_OF_DOCUMENT_TOKEN_TO_BE_REPLACED 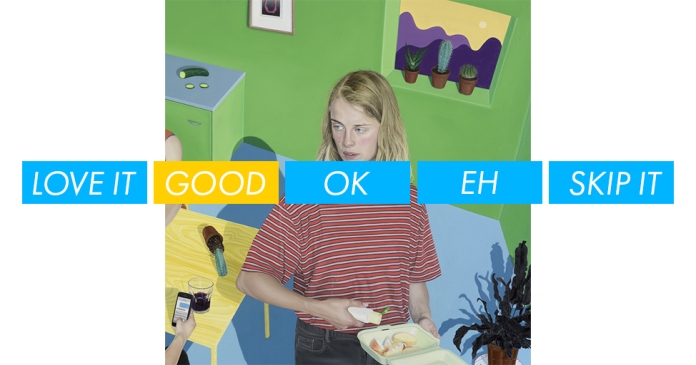 An LGBT indie folk rock singer whose previous touring experience includes opening for Laura Marling? Marika Hackman’s resume is enticing, to say the least, as the combination is incredibly unexpected and I am thoroughly pleased to have the opportunity to dive in and see what she has to offer. Thankfully, her new album I’m Not Your Man, mostly succeeds in matching the expectations made simply by the premise. It’s a fun, incredibly witty expedition into the mindset of Hackman and her unconventional take on life.

END_OF_DOCUMENT_TOKEN_TO_BE_REPLACED

It’s impossible to start talking about Blossom without asking “what happened?” Milky Chance stepped into the world’s spotlight with their 2013 single “Stolen Dance,” a fun guitar polka of a song that asked folks to “do the boogie,” and most did. It was slow, but its dreamy guitar plucking and enthusiastic vocals from Clemens Rehbein made it a hit for many; and most were not disappointed by the rest of the debut album, Sadneccessary, which featured many songs of the same vein. What helped create the dreamy vibe was a collection of guitar riffs surrounded by a fog that sounded as if there’s a party in the distance and Rehbein is on his way to join. Blossom, unfortunately, does not have that dreamy vibe or same excitement that Milky Chance had in their previous album. In fact, most of the signature moments that made “Stolen Dance” a hit are really hard to come by in this album. There is nothing wrong with changing direction, but it seems like more was taken out than put in.

“Blossom” is everything that is good about the album. It makes it very clear that while the influences from the previous album are still around, this is a much cleaner production. The vocals balance well enough with the background guitar and modest electronic keys. The guitar riff is great and the song is quite catchy, making great use of lead singer Clemens Rehbein’s raspy and expressive voice. Overall, it is a fun start to the album.

“Firebird,” and mildly the previous song “Ego,” signifies all the warning signs for an incredibly uninteresting listening experience. Rehbein is still very fun to listen to, but the stripped-down medley in favor of an acoustic guitar production is not at all memorable and does nothing to stand itself out. In fact, I wrote this section while listening to the song and after it ended, I couldn’t remember any part of it.

“Clouds” marries the vocals with the new direction well, but the song suffers greatly from a strong inconsistency in pacing and tone. It’s a shame because “Clouds” is one of the more fun and enjoyable songs on the album. The chorus is fantastically tropical and speeds up to a dance party. What stops this song from reaching a notable height is the vocals. Rehbein sings very slow and methodically, causing the verses to be unbearably slow until the song uncharacteristically picks up on the chorus. The inconsistent pacing makes a potentially fun song a reluctant dance song.

It seems like Milky Chance wanted to create an album that was more mainstream and focused on making songs that sound very similar to many other indie bands. Gone is the abstract and wild electronic decisions from Sadneccessary and in comes the acoustic and electric guitar focused songs. The guitar was a pillar of the previous album, but much of the creativity in terms of arrangement and tone is long gone. Perhaps the hope of making a weaker production was to focus on good writing, akin to the best folk albums, but this is not the case. Blossom, in terms of lyrics, only provides vague love metaphors which are nowhere near strong enough to set aside the production criticisms. In changing their style, Milky Chance lost their signature flavor, leading them to sound more like every other indie pop band. It’s very hard to recommend anything outside of the first song, “Blossom,” and even then, there are plenty of better albums to listen to, whether you like electronic, indie, pop, or folk. SKIP IT. 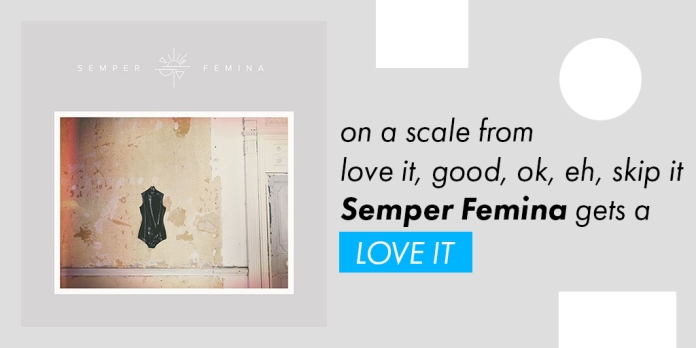 After Laura Marling’s release of Short Movie, a tale of her time in the United States, there was a question over what direction she was going to take. Unlike her previous works, Short Movie was a far more light-hearted and electric guitar-heavy production. Was she going to continue in this route or was she going to return to the more acoustic yet strange songs of her past four albums? The answer is a bit more complicated than that, as Semper Femina is not a retread of any of her work. Laura Marling is evolving her talents and venturing new grounds, while using her past works as a jumping off point. The light-hearted Marling looking for answers in Short Movie becomes a contemplative and distressed narrator still looking for answers, but nowhere near ready to reach a restive conclusion as she has done in previous album. She fully accentuates her emotions, however happy, sad, raw, or emotional as they are, and she’s never sounded better.

“Soothing” strikes your head and never apologizes. It is stuck in a moment of great harrowing sadness and distress. The speaker is breaking from a figure she once knew, someone who lived with her. Now, all that’s left is a “creepy conjurer” watching over her, feeding the anxiety-filled madness of the senses. Her pain can be felt not only through her words, but by the deep chords of the bass, emphasizing the distraught of Marling’s echoing words.

What adds to the sharpness and darkness of “Soothing” is how much the following song, “Valley,” is a calm acoustic song about love that is far away but physically, within reach. The song’s premise may not sound any happier, but Marling sings the lyrics with serenity. When she remarks how she “will do [her] very best,” there is a real optimism that good things will come. This song is not just important for what it is, by itself, but in its placement. It’s disorienting switching from a strong bass-filled song about discomfort and sadness to a song about a calm reflection on love. This may in fact be a point in Marling’s favor. It opens the album to uncertainty. In the first two songs, alone, it is clear that this is not an album about a journey. There are many layers to go through and so many are unexpected.

“Wild Fire” is special in that it is mostly depicting the narrator talking about a girl that she loves and, in doing so, gives a far clearer picture of the narrator than the girl. The girl is shown as a writer with a lot on her mind. That’s about it in terms of a concrete description. The narrator makes a point that the girl’s parents have problems, but that could easily be coming from a singular perspective. In addition, the narrator’s interest in the girl’s writing skills is to read about how she’s depicted. In the bridge, Marling sings out “Do you cry sometimes?” This question, and the way it’s sung, appears to be directed at the wrong person.

“Wild Once” is an empowerment song, and a quiet one at that. It inspires the narrator, through a ritual of sorts, to remember that she was wild, “chasing stones”–a line powerful in its primitiveness. There is an encouragement to not change in the face of a strong force, whether it’s normalcy or the simplicity of expectation. The narrator talks about how “serene” and “clean” the wildness of someone can be; and to the right listener, it can be enough to really encourage the creativity and individuality this song calls for.

“Nothing Not Really” feels like a resolution of many feelings, ending on a note where the narrator reminds herself of the importance of love and how fragile it is. This claim comes as “the only thing [she] learnt in a year.” This is not a happy song and it doesn’t feel like the narrator truly surpassed all her struggles, but it was not supposed to be about that. From the beginning two-song forward, Marling made clear that the album is about a bunch of thoughts, feelings, and events. Not all of them are ready to be resolved just yet. Still, this song makes it clear that love, even if it’s an “afterglow,” is one thing to keep strong.

There is so much more in Semper Femina that needs to evaluated, and there could’ve been an analysis on every single song on this album. “Don’t Pass Me By” has a strong electric guitar chord that envisions a lost soul thinking of an old relationship. “Next Time” talks about impending doom that comes from folks not paying attention. It’s a thick album that focuses a lot on a narrator (it’s not clear whether the perspective is always, if at all, Marling’s) trying to understand strong emotions. This comes from her own thoughts on herself and those of other women. It’s not an easy album to listen to and it’ll take a lot of work to fully detail everything that Marling has written into this album. It’s not just a great album, it’s one that will stay on the mind for a very long time. LOVE IT.