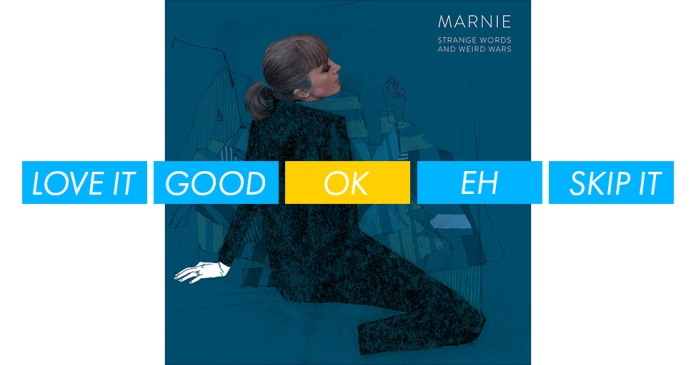 Helen Marnie purposefully distanced herself from Ladytron with second album Strange Words and Weird Wars, more so than when she debuted her first solo record, Crystal World, in 2013. But it still remains a Ladytron-esque album even though the alternative nature is lost and the electronic pop presence is heightened. Her voice and synth-use is rather reminiscent, but are amped up in such a way that largely dismisses the comparison. There’s a thick layer of echo in her voice, as well as a flood of flowing synth throughout the album. Marnie’s abuse of self-distortion keeps her vocals from drowning underneath the heavy production; instead, it merely melts alongside it–acting like an additional synth property. Even though she has grown past the alternative phase, her intoxication with everything electronic disables each track from being distinctive.

A throbbing synthesizer and urgent vocals in “Alphabet Block” set the 10 track album off on a lavish electronic 80’s dreamscape. Segments of lyrics sound random next to each other; and while we could sit here and try to find the meaning, it really doesn’t matter. It’s the voice and production that carries the punch to propel you to finish the rest of the album. It’s also fun, a feeling you’ll catch quite a bit, especially when it comes to “G.I.R.L.S.“

The third track starts a pattern that may not have been intended. “G.I.R.L.S.” revolves around a girl, or possibly herself, and the obsession that comes with it. It’s a cheer for girl power, and the captivation it holds over everyone. With a similar stand, though not as fun, “A Girl Walks Home Alone at Night” takes a haunting view about a girl who’s about to reach “the last day of her life.” Though it might just be as simple as that heartbreaking truth, which in itself is enough to fill your eyes with tears, it also comes off as a cry out for independence. Because even if something might happen, the girl doesn’t need anyone to save her (“I’ll keep the path and take my chance”). “Lost Maps,” which regains the momentum set by the tracks previous to “A Girl Walks Home Alone at Night” with a production in the vein of Röyksopp, advises a girl, or again herself, to not “believe what they tell you” even when “darkness closes on you.” These three tracks, though incredibly different from one another in terms of tone, conveys the same individualistic spirit, or ode to girls.

Another stand out, “Electric Youth” embeds itself in the middle of the whole girl power line of thought with a throwback to the good ol’ days. It plays up the real purpose of Strange Words and Weird Wars which is to repress worries and figure fun as the only prospect. It plays up the whole nostalgic effect every track seems to have even when they’re not directly recalling the past.

Marnie thrives within a CHVRCHΞS-like atmosphere where electronic ambiance lends most of itself to pop; however, she also carries the same problem that semi-plagues the Scottish band as well–every track sounds the same. Yes there are certain obvious differences. But the overwhelming sonic production and its consistent presence leaves a longing for diversity, something she achieved in her earlier work as a solo artist and as part of Ladytron. And there’s also this feeling like ‘I’ve heard it before’ rushing through the album. Strange Words and Weird Wars has many throwbacks to childhood and sound to back up why; despite that, there’s still a pretty low standard for originality with the subconscious utilization of familiar melodies. OK.