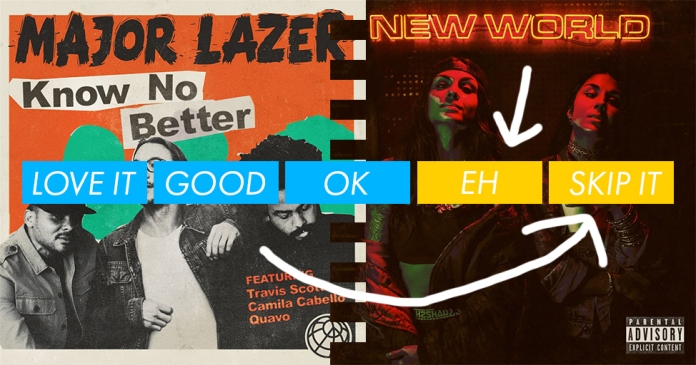 DISCLAIMER: It starts with a mild rant.

It’s slightly exasperating to see established producers flood the marketplace with EPs. It distracts listeners from exploring lesser known artists because an EP with a big name attached will immediately overshadow them. There’s only so many EP’s one can listen to and it should be a platform primarily utilized by rising artists to deliver a few soundbites for potential recognition. Of course, the exception would be if an album was already released and the artist wanted to extend it. Hence why it’s called extended play. Or if an artist wanted to test the waters with a completely different sound. Otherwise, Major Lazer and Krewella have no business using such a format. Especially when it’s incredibly self-serving (for the purpose of keeping their names in people’s minds) and does nothing special to evolve their musical inclinations.

Let’s start with Major Lazer, the more accomplished of the two. Currently comprised of Diplo, Jillionaire, and Walshy Fire, Major Lazer is by far one of the greatest musical projects in the industry; even though I would argue that their first few years were more impactful. Regardless, the latest LP release, 2015’s Peace Is The Mission, was entertaining and a quintessential summer banger. But now as a trio, they’ve released, perhaps, their most irrelevant compilation to date. Know No Better is complete with 6 tracks, all without a shred of originality. The title track features Travis Scott, and to put it lightly, it’s one generic and predictable waste of 3 minutes and 46 seconds. Scott couldn’t do much to save it; especially when it took him 5 lines to conclude that a car is too small to fit the whole squad (“Pull up in that foreign, my God|Whole squad get in that, get in that|Please say it ain’t true|I had to go and cop two|Hell nah, we can’t fit in that”).

Diplo is also the sort of guy who’d incorporate a little Spanish at random intervals. He released “Dale Asi” featuring Mr. Fox in a previous EP, Apocalypse Soon, back in 2014. Presently, he showcased not one but two tracks sung in Spanish. One of them, “Buscando Huellas” (translated to mean “looking for footprints”) featuring J Balvin and Sean Paul, actually contains some fraction of fun with light reggaeton and vocal distorted breaks giving off a pleasant summer-y vibe. However, before the second Spanish track would appear, they had to slightly butcher the Spanish language by spreading the word and title name “Particula” as far as it can go: first, it was used as slang for particular; second, it referred to hidden articles of clothing; and third, it opened an opportunity to say a similar looking word in Spanish because they happened to rhyme. If Know No Better wasn’t already deemed a electronic, cross-cultural mess, it became pretty clear by this point. SKIP IT.

Next is Krewella, a sister-duo who had been battling to restore their image after Rain Man’s dramatic departure in 2014 and negative criticism from EDM fans and producers, including deadmau5. Due to a lack of prosperity, Jahan Yousaf and Yasmine Yousaf experienced a lengthy hiatus and have shied away from releasing another studio album since their debut as a threesome on Get Wet back in 2013. However, they weren’t completely quiet–releasing a couple of stand alone singles over the past few years which led up to their comeback EP last year, Ammunition–an angry and dark strike against the hate they’ve endured. Now, with the release of New World, Pt. 1 (oh boy, must there be another part?), the anger hasn’t completely left the building; but it has slightly mellowed. The 7-track EP features three previously released singles, and a collaboration with Diskord, who worked with them on “Beggars” for Ammunition. It’s definitely their most pop-laced efforts. The opener, “Calm Down,” starts the same way “Beggars” did when it kick-started the previous EP, with strong words against skeptics, “Don’t tell me to calm down, I’m about to tear this fuckin’ place down.” The follow-up “Th2c” is a complete rip-off from Charli XCX’s playbook circa Number 1 Angel. They even configure the title like one of XCX’s songs from the mixtape, “Ily2.” Nevertheless, “Fortune” featuring Diskord and “Love Outta Me” is Krewella at their most familiar. Seeing these tracks right next to each other shows a lack of direction and proves how the the sisters are still recovering from industry fallout. They’re incorporating a bit of this and a bit of that, which makes them seem distracted or confused. Yes, EP’s don’t need to be cohesive. But in Krewella’s case, it needed clarity and a sense that they’ve moved on. EH.